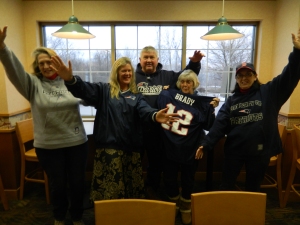 Wins by the New England Patriots and Seattle Seahawks in the playoffs last weekend have potentially positioned the professional football teams to face each other in a Super Bowl bout, heating up a friendly – albeit serious – East/West Coast rivalry in my family, Bennett/Larned versus Landeck.

Backing the Seahawks are Deb, Wayne, Katie, Nate, Dan, Sofia and their teacup poodle Scooby-Doo. In the Patriot’s corner are Mike, Melane, their German Shepard Polaris, Dixie, Candy and I.

The possible match-up between the northeastern and northwestern competitors is an exciting prospect.

In the Northwest they have …

That is a big ‘if’ given the season’s history where Brady’s defenders have not always adequately protected him. Nonetheless, Brady has remained determined.

Melane believes Brady has given his heart and soul to the Patriots – even breaking a record last Saturday for postseason touchdowns set by legendary QB Joe Montana and deserves one more Super Bowl ring. “Tom Brady broke Joe Montana’s record in the last game, Brady deserves to make it to the Super Bowl and to win.” 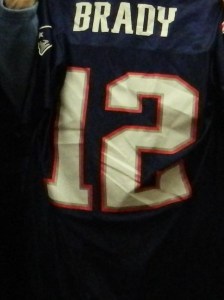 In the Northeast we have what we need ….

Mike noted the location of the match-up could make a difference – Phoenix, Arizona on February 1. Kickoff is 6:30 p.m. Eastern time, 4:30 Mountain time. Halftime entertainment will be singer Katy Perry.

“I would hope the Patriots win. They are good but they have to work at it,” Mike added.

Candy points to intangibles as the key to a victory for the Pats if they take on the Seahawks.

“I feel the Patriots will win because they play as a team and have excellent leadership in Brady and Coach Bill Belichick,” she said.

The Seahawks, a 1976 expansion team coached by Pete Carroll, are the reigning Super Bowl champions. Their quarterback, Russell Wilson, wears number 3 and is spurred on by the loudest fans in the league. For the Seahawks the number 12 has a different meaning, it represents the fans.

Said Deb, “If the Seahawks were to play against the Patriots I would have to favor the Seahawks. You can’t help but get caught up in the spirit and excitement that blankets the city and it’s just pure joy being part of it. You can go anywhere or be doing anything and ‘The Legion of Boom’ brings smiles and engagement that is not usually part of an ordinary day.”

“Then there is the pure talent of each of the Seahawks players that is honed in on, and valued. You can pick any player and speak of the ‘IT’ factor that sets them apart. Coach Caroll and his coaching staff go above and beyond with their belief in them – and for them. He values each member and gifted them with the ability to see the value of each other. They not only play with each other but as well, for each other. The recipe goes beyond teamwork. Seattle Seahawks embody the word and meaning of TEAM. BOOM! ” Deb continued.

If the two teams make it to the final dance – Super Bowl XLIX, Wilson, 26, would be up against Brady, 37, who has led the Pats, an original NFL member, to three Super Bowl victories in 2001, 2003 and 2004. Going into the playoff season the Seahawks had been favored to repeat as Super Bowl champs. Meanwhile, Brady proved naysayers wrong when he came back strong after struggling early in the season hampered by minimal protection on the field.

On Sunday, January 18, the Seahawks play for the NFC title against the Green Bay Packers – QB Aaron Rodgers – at 12 noon Pacific time, 3:05 p.m Eastern time, at CenturyLink Field in Seattle, Washington to be broadcast on FOX network. A few hours later at 6:30 p.m. Eastern time the Patriots play the Baltimore Colts – QB Andrew Luck – at Gillette Stadium in Foxborough, Massachusetts to be broadcast on CBS for the AFC title.

Break out the Samuel Adams Boston Lager, it’s going to be a long day !

“… perhaps the major unifying factor that these four quarterbacks share is that they’ve consistently found ways to win. After all they wouldn’t be at this stage if they hadn’t,” wrote Tony Drovetto in an article posted on the Seahawks website.

Whichever two teams emerge victorious this coming Sunday, they will then head for the Super Bowl. Stay tuned …