Opera & Giant Puppets: Amy Trompetter’s Barber of Seville on display at The Ballard Institute & Museum of Puppetry in Storrs, Connecticut.

Fascinating, fun and festive – the Ballard Institute & Museum of Puppetry in Storrs, Connecticut reflects a unique educational opportunity. The University of Connecticut is one of a very few universities in the country to offer a degree in puppet arts. In addition to a bachelor’s of fine arts in the field, UConn offers master’s degrees, MA or MFA.

According to the university website, it all began in 1964 with the arrival of Professor Frank Ballard to the theatre department and the ensuing immense popularity of puppetry classes he taught there. Soon a “full length puppet performance” was staged on campus at the Harriet S. Jorgenson Theatre. Today graduates of the program are said to “perform and design” for theaters around the world. 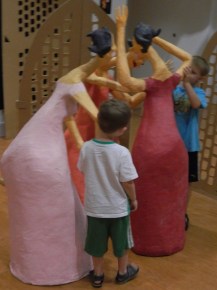 Eric and Tom Staba of Manchester, CT interact with the puppets.

“Yes, we encourage visitors to be hands-on,” explained Kiara Gonzalez, museum assistant, during a June 22 stop at the institute and museum located in the new Storrs Center. 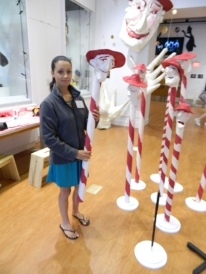 A vast showcase of puppets greets visitors to the front space of this small museum as an intriguing display of huge puppets beckons them onward to the middle, then rear spaces. Here, kids and grown-up kids can explore the world of puppetry. 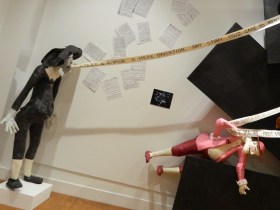 For those who think just of puppets with strings attached, it is a learning experience. Some puppets can be picked up and carried around under the watchful eyes of surrounding enormous, captivating creatures that are part of a current exhibit, “Opera & Giant Puppets: Amy Trompetter’s Barber of Seville” – on display through  October 12, 2014. As well, visitors can try their hand at making puppets at a work bench.

“It is a chance for the kids to learn that puppets are more than just what they have seen on television” said David Staba of Manchester, CT. who along with his wife Kimberly brought their sons Eric and Tom.

“The structure of it (the museum) is welcoming to kids,” he added. 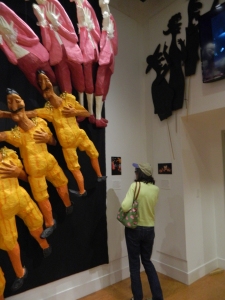 Today the museum kicks off a summer schedule of  “afternoon shows for family audiences” with Racoon Tales – a hand puppet show performed by Brad Shur and written by Paul Vincent Davis. It will be followed by George & Martha July 5, Bits & Pieces Puppets Show July 12, Lisa The Wise & Other Tales July 26, Toy Theatre Extravaganza August 2 and Family Friendly Pot-Pourri August 9. All shows are held at the Ballard Institute on 1 Royce Circle, Suite 101B. Shows take place on Saturdays at 11 a.m. and 2 p.m. – $7 for adults and $5 for children. Tickets are being sold at the door or go to bimp.uconn.edu.

The cafe inside the bookstore sells UConn made ice cream.

A UConn bookstore is connected to the museum by interior doors.

However, the museum is not just for children.

On this day adults also strolled about, pausing to take in the artistry of it all. Connected to the museum by interior doors is a new UConn bookstore branch featuring a variety of books, among them, ones about puppetry. UConn gear can be purchased here but a larger selection is available at the nearby main co-op. Within the Storrs Center bookstore is a cafe where UConn made ice cream is sold.

The Ballard Institute & Museum of Puppetry is opened Tuesday – Sunday 11 a.m. to 7 p.m. It is closed on Mondays. Associate Professor of Dramatic Arts, Dr. John Bell, serves as  its director. Admission is free but donations are appreciated.

Stewardship of the UConn pupperty program was taken over from Ballard by current head Bart P. Roccoberton, Jr. Call 860-486-4568 or, go to http://www.drama.uconn.edu or PuppetArts@uconn.edu for more information.