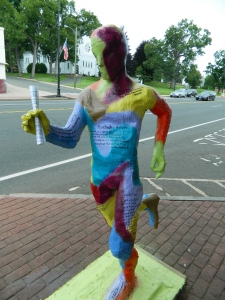 It has been decades since the first mall was built in the United States circa the late 1950s. Soon enough the mall phenomenon usurped the role of  “downtown” as a retail shopping magnet and place to meet across America.

For nearly as long the struggle has ensued to keep “Main Street” and “Downtown” relevant. The Main Street program emerged to assist towns and cities with revitalization. As well, individually communities continue the fight to more than just keep their main streets alive -rather to once again make them vibrant.

An example of efforts to preserve America’s main streets is currently underway in Manchester, Connecticut. The Imagine Main St initiative is celebrating its second anniversary with a Runner’s Art Parade – “a series of sculptures created by area artists” paying homage to the iconic Manchester Thanksgiving Day Road Race, which annually draws thousands of runners, from elite to recreational, to this small New England city.

Last night the Runner’s Parade was officially unveiled, however, the sculptures were available for viewing in the preceding days. Among them are “Poetry in Motion” by the Wit & Wisdom Club, “Together We Are Run” – a unity piece with the Boston Marathon that recently marked one year since a terrorist bombing of the historic event, and several more. The sculptures lined the lower part of Main Street during the celebration of the 23rd “Pride in Manchester Week”, which kicked off on June 7 and runs through to tomorrow, Saturday, June 14.

Aimed at not only honoring the city, but also at attracting visitors to the downtown, “Pride in Manchester Week” features a host of activities. A march tomorrow morning will be led by the Manchester Pipe Band, to a ribbon cutting on Hartford Road for a commemoration of the 100th anniversary of Heritage/Homeland Day. The brainchild of a member of the Cheney family that owned and operated Cheney Mills in Manchester, Homeland Day dates back to 1914 when it was started to recognize the varied heritages of the mill workers.

Ceremonies are scheduled to start at 10:00 a.m. at Cheney Hall. The day will also offer family picnics, old time music, games, entertainment and arts. The Cheney Homestead, Fire Museum, Keeney Schoolhouse and Old Manchester Museum will be open without charge – some will have a guided tours option.

Of course, it all takes place only a short walk away from Downtown Manchester and Main Street!