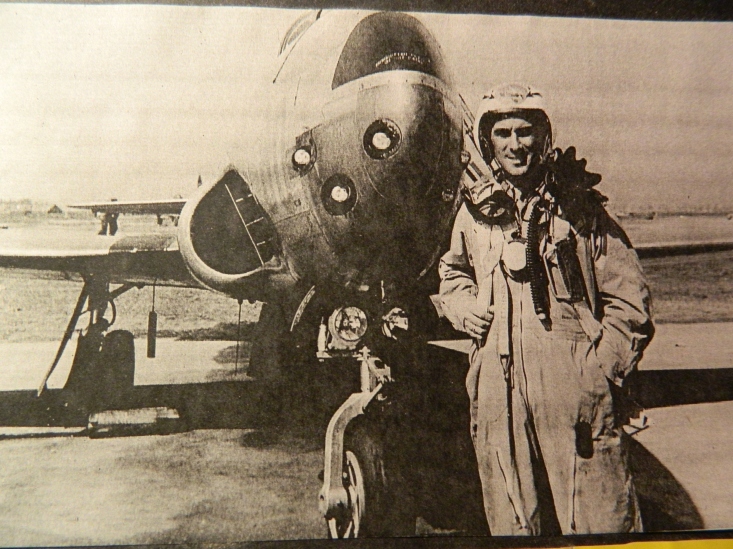 ‘Uncle Bunker’, USAF Major Oliver E. Generous who served as a WWII fighter pilot, shown with one of his jets.

With the approach of each Memorial Day, I think about how proud my mother and father were of two of  her brothers’ service during World War II – one was a fighter pilot and another was a bomber pilot.

Part of what has come to be called “The Greatest Generation”, they were among the young warriors who rose up to save the world from the tyranny of German dictator Adolf Hitler. And they are among those who my brother John calls ‘Quiet Heroes from Connecticut’s Quiet Corner’. My brother is also an United States Air Force veteran and American Legion past post commander.

Nicknamed “Bunker”,  United States Air Force Major Oliver E. Generous died in service to the nation. In addition to serving as a WWII fighter pilot, he flew cover for Berlin Airlift missions after the war. With West Germany surrounded by Russians, supplies could not be brought in by land so they had to be flown in. He was stationed there for three years and it is estimated he flew hundreds of missions.

A popular family story about the Generous brothers – Bunker and Al – is of the two as young cadets training in San Antonio, Texas. Al went through first followed by the younger Bunker. Push-ups were part of daily calisthenics, and Bunker I’ve been told, brought home the story of all the cadets in his unit “moaning and groaning” over those push-ups, only to have the officer in charge point to another cadet who preceded them and not only met but surpassed the number expected each day. The story goes, one day Bunker shouted out, “What darn fool did that ?” The reply came back, “His name was Generous.”  To which Bunker said – “oh man – that’s my brother Al.”

Needless to say, determination was a family trait.

Described by many in the family in stories shared over the years as handsome with an engaging  personality, “Uncle Bunker” grew a mustache intended to resemble the style mustaches worn by many Germans soldiers during the war era. According to my mother, it was meant to help him conceal his identity if he was shot down behind enemy lines. Another Bunker story was of him flying low in the vicinity of his hometown of North Windham, Connecticut where he would “dip the wings” of his plane to say hello. When his mother “Ma” died (my grandmother), so he could make it to the funeral in time, I was told, “Uncle Bunker” received permission to fly his military aircraft into the small hometown airport –  which made news. 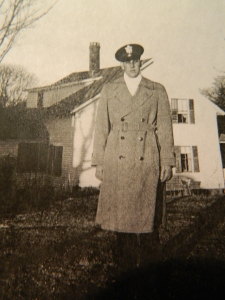 He made news again, escaping death when as a member of the 23rd Fighter Squadron, his F-80 Shooting Star crashed after it ran into engine trouble while he was flying using instruments in a storm in Augsburg, Germany. That report was picked up by the local newspaper. According to that article, “Uncle Bunker” was on a routine training flight near Fuerstentedbruck AF Base and was able to successfully bail out. It had been the third such incident with F-80 aircraft near Augsburg within a short period, one of those crashes resulted in the death of the pilot.

Subsequently assigned to General LaMay stateside, Bunker’s responsibilities included testing aircraft at all bases. It was during one of those missions that he lost his life in service to the nation. The plane’s engine failed. He was flying out of Pittsburgh that day. He ordered his navigator to bail out but Bunker stayed with the plane until he was certain it was far enough away from a residential area to ensure the safety of the residents.

My mother said the area he guided the plane past included a school. By the time he finally bailed out, he had lost significant altitude – his death stayed with my mother throughout her life. Leaving behind a widow and three children, “Uncle Bunker” is buried in Arlington National Cemetery.

Uncle Al – Alfred Generous trained to be a bomber pilot to fly B-17 bombers during the war. Just before he was to have been deployed overseas, he sustained serious injury while on a training mission after his plane also ran into engine trouble and crashed. He was in and out of multiple military hospitals over time. At one he met a military corps nurse. They married and raised a family.

Over the years when my mother would hear or read news reports of  former prisoners once held in German concentration camps living fulfilling lives, she would wonder aloud if the actions of her brothers helped free them.

As with so many of their generation, they served the country modestly – leaving behind a quiet legacy. Quiet Heroes from Connecticut’s Quiet Corner.