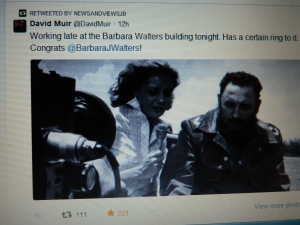 While other young girls sat glued to the television for Miss America pageants dreaming of someday wearing that crown, I could hardly wait for the next Barbara Walters Special. I would lie on the floor up close in front of the T.V. because I wanted to take in every word, every nuance, not miss anything as Barbara interviewed heads of state from across the globe. Perhaps, the most memorable for me was her interview with Fidel Castro.

Although I always loved writing – which for me feels like breathing – I could not truly have imagined that my path would lead me to become a real life journalist. I am certain, however, that images of Barbara Walters conducting, with seeming aplomb, mesmerizing interviews with some of the most powerful, influential and, or, best known people in the world stayed with me. 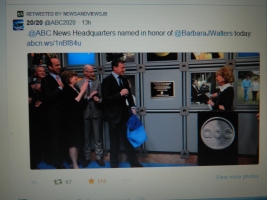 She never rushed her interviews. She listened intently and clearly adjusted her questions if the unexpected popped up during a discourse. And she never appeared to back away from asking what is known as the ‘tough question.’

As time went on her specials evolved to include Hollywood celebrities – in particular I recall the one with Katharine Hepburn. She is a favorite of mine and was a fellow Connecticut native. Barbara took a lot of ribbing after that interview because of asking Ms. Hepburn if thinking of herself as a tree -and I’ll paraphrase – “what kind of tree are you?” In truth though if one reviews the exchange between the two, it was a question that flowed quite naturally and had the promise of offering greater insight into the reserved Hollywood legend.

A lover of ‘biographies’, over the years I have found Barbara’s interviews fascinating. As a journalist, I have found them to be exhilarating. There have been times in the midst of  conducting a challenging interview myself when I’ve taken a deep breath and channeled her – I call it the Barbara Walters effect.

A pioneer who broke barriers for women in the field of broadcast journalism, Barbara is set to wrap up her latest gig on “The View” this Friday. Concurrent with her final days before retiring from “The View” she snagged an interview for ABC news with Shelly Sterling, wife of the embattled owner of the LA Clippers.

It has been announced that the ABC News Headquarters has been named in honor of Barbara. How perfectly appropriate.

From one of the innumerable women you inspired Barbara – congratulations on a remarkable career.