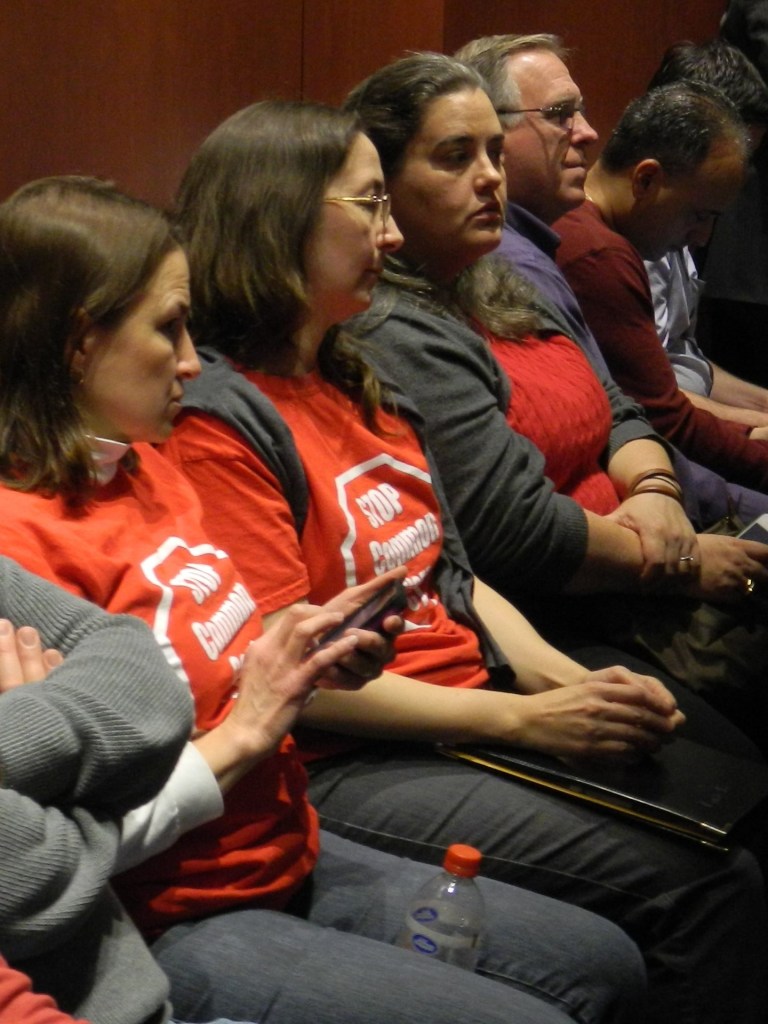 Bright red t-shirts that read “STOP COMMON CORE” dominated the halls of the Legislative Office Building in Hartford, Connecticut last week where a marathon hearing on the issue began at noon March 12 and ran late into the night. Three hundred people turned out for the hearing and some of the one hundred said to have signed up to speak waited for their turn to come at 11:00 p.m. and beyond. Common Core standards adopted by the state Board of Education in 2010 came under fire despite an appeal from the BOE chairman to save them. Lighter moments were not characteristic of this agenda, rather the day was marked by serious looks on serious faces on differing sides of the education controversy.

Common Core seeks to establish consistent educational standards across states for grades K-12. It is described by some as a national school standards curriculum. In a nation founded on the rights of the individual that has long encouraged freedom of thought as a hallmark of public education, opponents are decrying the implications of Common Core as stifling both.

Legislators explained the ground rules for the Common Core hearing at the CT LOB.

“While Common Core pretends to put children’s learning first, it is really an attempt to nationalize education placing each child into a government-backed educational system,” according to STOPCommonCoreinCt.com.

In his testimony at the hearing, state BOE Chairman Allan Taylor declared the value of Common Core, “With respect, it makes no sense to return to the mediocrity of our prior standards by delaying implementation of the Common Core. Please don’t make Connecticut go backwards.”

In growing numbers, parents and educators in states including Connecticut, New Hampshire and outside New England are rallying against Common Core. Republican Rep. Jane Cormier is a vocal adversary who in an essay published on STOPCommonCoreinCT.com cited five reasons to halt the initiative which she indicates stands to fundamentally change the manner in which American students in public schools are educated.

Common Core she says is assessment  driven and “all computerized” meaning its high expense will come out of local taxpayers’ pockets. Despite claiming to have more rigorous standards, Cormier maintains numerous educators argue math and English components are lower. Perhaps getting to the heart of a change denounced by opponents, Cormier notes information texts will overtake literature in the English component and students will be taught as “cogs in a government managed machine not good for developing independent thinking skills,” not multi-dimensional learning. Assessments will include “data collection,” behavioral and academic criteria on kids that will then be available to federal, state and outside contractors – calling into question privacy issues she said.

“If anyone tells you this is not part of Common Core they are simply not informed – it is indeed a significant part of this progressive movement,” stated Cormier.

She adds there are no fewer than three federal statues prohibiting a nationalized curriculum of “top-down” education.

Connecticut House Minority Leader Larry Cafero, a Norwalk Republican, has called for a delay in implementation of Common Core. He helped secure the more than fifty legislator’s signatures required to force the hearing.

Defenders of Common Core insist new standards are needed because too many students are arriving at colleges unprepared.

At the hearing, parents and educators rapped the Common Core plan itself for inadequate preparation, charging that the rollout has been uneven. Many want a moratorium on the implementation charging that proper preparation is lacking for new standardized testing set to get underway this year for the first time. This is a real concern for the Connecticut Education Association according to representatives, in terms of fairness to the students and the teacher evaluation component that ties teacher evaluations to student performance. The CEA wants a review of the teacher evaluation component and input on it.

Defenders of the plan contend approximately forty-three states signed on to Common Core voluntarily. Opponents charge that Common Core was developed “behind closed doors” by special interest progressives who put it in place without adequate public participation.

“They passed it without asking us, the educators or parents,” Connecticut state Senator Joe Markley (R-16) told Breitbart News.