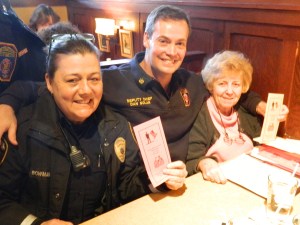 As so many Americans go about their everyday lives, it remains important to remember the men and women of the United States military who make that possible. With that in mind, a new beneficiary of the “30 Years Windsor Chamber Cares” auction will be Send Hometown Windsor to the Troops – SEND. Over the past ten years through SEND, care packages have been mailed monthly to some 160 soldiers from the Windsor, Connecticut area serving in the war zones of Iraq, Afghanistan and also Kuwait. Slated for Friday, April 4 at 5:30 p.m. Windsor Chamber Cares will be held at Maneeley’s Banquet and Catering in South Windsor.

“Have we forgotten?,” said Ann Walsh, coordinator of SEND, a community service project of WIN TV. 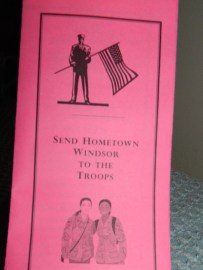 Walsh made the appeal to the Windsor Chamber of Commerce to include the program for the troops in the 2014 auction. And, as it turns out it is a milestone anniversary – the 30th annual benefit auction -making it Windsor’s longest continuing auction, according to Walsh. Over thirty years more than $600,000 has been raised by the chamber auctions for twenty-plus local, non-profit organizations, including the chamber itself.

Critical to the SEND program, Walsh pointed out is having money to pay postage to get the care packages to the troops.

“We were running out of money for postage,” she said.

Thus far, the Windsor community has always come through with donations, noted Walsh, adding that collection jars placed at businesses throughout town had been a lifeline. However, with plans for U.S. involvement in Afghanistan to draw down, it appears those who remain fighting there may be less in the thoughts of the general public – leaving SEND in need of postage money. Now, Walsh is counting on the community to support the auction and show continued support for America’s service men and women.

Once SEND was approved as a beneficiary for the “30 Years Windsor Chamber Cares” event, Walsh set out to enlist help.

“I bumped into Dan and asked him if he would help,” said Walsh, referring to Windsor resident and Hartford Fire Department Deputy Chief Dan Nolan.

“I have benefited from this program, I am a recipient of multiple packages. I know what it feels like to receive them,” said Nolan, who also serves in the Connecticut Army National Guard and did tours of duty in both Iraq and Afghanistan.

As well, Walsh recruited Sue Bowman of the Windsor Police Department to assist.

“Whatever Ann needs me to do, I will do – I believe in Ann,” Bowman said when the group met for lunch January 31 at Union Street Tavern.

Thus far, Nolan said he has secured donations of gift certificates from a number of Greater Hartford area restaurants such as the Wood-n-Tap, Salute, Bricco and Grants.

Getting a donation commitment for lunch with a top Connecticut dignitary is a high hope for Walsh. She has a couple possibilities in mind like Lt Gov. Nancy Wyman. Along with radio personality Brad Davis, Wyman conceived the Connecticut Wall of Honor dedicated at the state capitol building to honor the U.S. military who lost their lives in Iraq and Afghanistan.

Other beneficiaries are the Windsor Art Center, Windsor Education Foundation and the Windsor Chamber of Commerce.

There will be silent and live auctions. Tickets can be purchased online at http://www.windsorcc.org or by calling 860-688-5165.

“Every year is better than the year before and the 30th will be the best ever! Please plan to bring your family, friends, neighbors and business associates to share in the fun,” says Walsh.