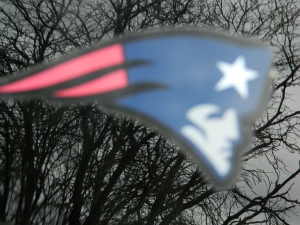 Clearly, the highlight of Tom (could he be any cuter) Brady’s post Patriots/Broncos November 24 game press conference, posted on the New England Patriots website, is his broad smile as he says what sounds like -“Jackie”- when calling on a reporter in the room.

Okay – now that I have that out of the way …

What a night last night. Brady and the Patriots came up with a 34-31 win at frigid Foxborough but one that had Patriots’ fans holding their collective breath up until the final play, a field goal from Stephen Gostkowski giving the Pats the victory in overtime. From that bleak first half and the frustration of quarterback Brady’s preeminent rival, Peyton Manning, being so far ahead to the excitement of Brady & company’s methodical come from behind second half, it was a nerve-racking, nail-biter of a ride that spilled over past regulation time.

“We found a way to get back in it and took the lead,” said Brady. Giving much of the credit to the Patriots’ defense, Brady added,” It was a good team win.”

By the way, someone needs to tell sportscaster Al Michaels to buy a winter coat and gloves. As well, the entire broadcast team needs to invest in hats – it’s November, it’s New England, it’s cold.