The Fifth Annual Scarecrow Festival & Contest runs through October 26 in Manchester, Connecticut. There is no cost to visit the historic downtown where individuals, schools, businesses and organizations have put their imaginations to work and created an entertaining variety of scarecrows that line the long Main Street in the “City of Village Charm”.

Survived the fire and a come from behind victory for the ages. 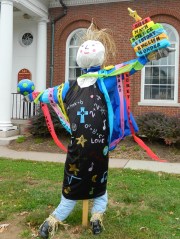 From the local produce farmer scarecrows that greet visitors at  the northern gateway to the the pirate ship scarecrows collaboration by students at Bennet Academy at the southern end of the street, the festival makes for a fun stroll. As one might expect, a book wizard scarecrow graces the entrance to Mary Cheney Library. Nearby is a ballerina dressed in pink. And, not only did the Red Sox stage a come from behind victory for the ages this past Sunday night but a Red Sox scarecrow still stands across the street from where an October 12 fire destroyed two businesses.

According to a member of the Bennet Academy security detail, the pirate ship has been a schoolwide effort with seven scarecrows so far and a cannon yet to come. A whale that was part of the exhibit apparently “swam away” on Saturday night but the hope is that it will quietly return. 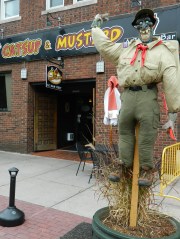 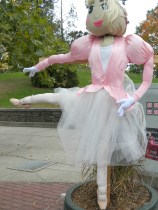 Voting for favorite scarecrows is taking place at several Main Street locations including, Anne Miller Real Estate, CTWorks, MCC on Main, Mary Cheney Library, Salon Petite, Silk City Antiques & Decor and Pinewood Furniture. Great Harvest Bread Co. had been a voting spot before it was gutted by the recent blaze. Votes can also be cast via Facebook.com/Downtown Manchesterscarecrowfestival. Winners will be announced Saturday, October 26, at the Dancing Bears Fountain near Mary Cheney Library.