Farming was a way of life in 19th Century New England.

Once inside, visitors were able to immerse themselves in what life was like in a New England village circa the 1830s, from farming sheep and cattle to horse-drawn rides, oxen at work, an old schoolhouse, Meeting Houses, a “Hartford to Worcester” stagecoach ride, a shoemaker at work, water-powered carding and grist mills and much more.

Meeting Houses were a focal point of New England villages. In addition to the Center Meeting House with an interior and exterior looking not too different from existing Congregational churches in some of the Northeast’s oldest towns, the “Friends” Meeting house was originally located in Boston and was used for worship by a Quaker sect of Protestants. As well as offering Sunday sermons which lasted two hours and were held twice on Sundays, Meeting Houses became places to hold town meetings.

Nearby is Knight’s Store that would have sold everything from dishware to cloth for dressmaking, to vinegar and wine. At that time although women were not allowed to drink publicly, they could buy wine at the store to bring home and drink there, according to the OSV historians.

A nuzzle from one horse to another.

At the school house , a school mistress gave a lecture about education in the 19th Century.

Hands-on chance to clean the wool.education in the 19th Century.

Each district paid for schoolhouses from property taxes. Attendance was not required but was available to any children who wanted to attend. Due to the availability of schools, during that era New

England had the highest literacy rate of any region in the country.

At one typical farmhouse, despite the summer heat the kitchen hearth fire was going because cooking still had to be done.

Villages often had a tavern where travelers could stop for food and drink or an overnight stay; other common fixtures were a bank and a country lawyer. The small law office here was relocated from Woodstock, Connecticut and refurbishment of the building was paid for by the Massachusetts Bar Association. 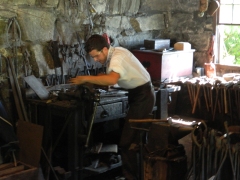 Under a spreading chestnut-tree The village smithy stands; The smith, a mighty man is he, With large and sinewy hands; And the muscles of his brawny arms Are Strong as iron bands … Week in, week out, from morn till night, You can hear his bellows blow; You can hear him swing his heavy sledge, With measured beat and slow…

For more information about OSV go to http://www.osv.org