Photo of the USS Olympia

A campaign is underway to save the USS Olympia, the oldest steel hull warship afloat, the only remaining ship from the Spanish-American War, the flagship of Admiral George Dewey at the Battle of Manila Bay and – the ship that in 1921, brought home the World War I unknown soldier from France to be buried in the Tomb of the Unknown Soldier at Arlington National Cemetery.

Timothy Jarvis and Dalton Deakule shown at a “SAVE the USS Olympia” table in Vernon, CT on July 27, 2013.

“No one is still alive from the Spanish-American War. What is still here is this ship, the USS Olympia,” said Timothy Jarvis, one of two young men manning a fundraisng table in Vernon, Connecticut on July 27.

According to Jarvis, the overall preservation and transport effort for the historic ship is estimated to cost $80 million to be raised over a six -year period.

“No donation is too small,” he added. 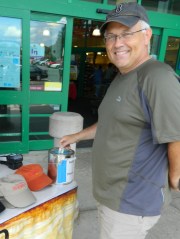 Currently, the USS Olympia is located in Philadelphia, part of Independence Seaport Museum, it is used as a museum ship. However, it was reportedly put up for new stewardship a few years ago because its current steward was unable to raise the money needed to maintain it; an approximate half dozen applicants were reported to have been whittled down to South Carolina and California.

In January of this year, the non -profit South Carolina Olympia Committee – SCOC embarked on a nationwide campaign to save and restore the USS Olympia, built circa 1892, and transport it to a final berthing site at Port Royal. The committee points out, it was here that the Spanish arrived in 1521, the French in 1562 and the English in 1670. Described by the SCOC as one of the most historic towns in America, Port Royal and the US Naval Station Port Royal are now Parris Island.

The ship’s hull is said to presently be in such disrepair that it is in danger of being delegated to scrap. However, the SCOC’s goal is to bring the USS Olympia to Port Royal “where long-term repairs will be made while the Olympia Museum is in operation,” according to literature about the project. A “custom-made, semi-submersible, floating dry dock” is under design to accommodate the USS Olympia and preserve it for transport to South Carolina which will become its permanent home as a national museum for future generations. The floating dry dock is being designed by an east coast naval architectural firm, a commitment representing $30 million, notes the SCOC.

“The benefits really are to America’s legacy,” Pete Richards of the SCOC said in a video posted on the website http://www.scolympia.org.

It is also the hope of the SCOC to eventually become the National Olympia Foundation with widespread support from across the nation.

According to Chambers, the USS Olympia was one of the first warships that made it clear during the late 19th Century that the United States was capable of competing with European countries such as Germany, Great Britain and France as a global naval force.