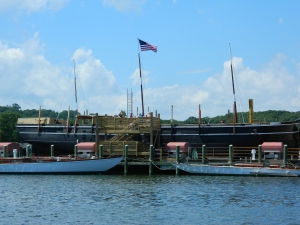 The Charles W. Morgan shown at Mystic Seaport Museum will be launched July 21 after a multi-year restoration project. 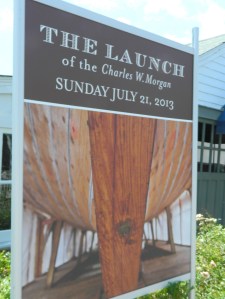 Visitors continue to climb aboard the Charles W. Morgan for an up-close look at its restoration in the final days before a July 21 launch of “America’s last surviving wooden whaleship” by Mystic Seaport Museum in Mystic, Connecticut. Yesterday, a steady stream of visitors of all ages ascended the wooden stairs leading to the Morgan to get a  firsthand look at the historic vessel that is slated to embark on its 38th voyage in the spring of 2014 and make its way to historic ports throughout New England.

A model of the Charles W. Morgan, in full sail on display at the museum gift shop.

According to the story of the Morgan provided by Mystic Seaport, a maritime museum, the 19th Century whaling ship was designated a National Historic Landmark by the United States secretary of the interior in 1966. Two years later, a major restoration and

preservation program began that included the 113 foot ship being removed from its berth and hauled and lifted onto the dock of the seaport’s Preservation Shipyard. In 2008, another multi-year leg of the restoration process got underway in the museum shipyard.

Built 172 years ago in 1841 in New Bedford, Massachusetts, the Morgan is described as the “crown jewel” of Mystic Seaport Museum. After completing its voyage next spring the Morgan will return to its berth at Chubb’s Wharf and “resume its role as an exhibit and flagship of the museum.”

Go to http://www.mysticseaport.org to view a video of the the restoration and preservation process. 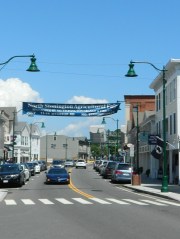 Downtown Mystic Village is about 3 miles from Mystic Seaport Museum where a drawbridge is part of the main street,

which has numerous little shops and Mystic Pizza made famous by the movie of the same name.

Addendum:According to the Mystic Seaport Education Programs phamplet, the 2013-2014 school year has been proclaimed the “Year of the Charles W. Morgan” by the state of Connecticut. It will feature a series of learner-based programs and resources for teachers about the state’s maritime heritage. Check http://www.mysticseaport.org formore information.