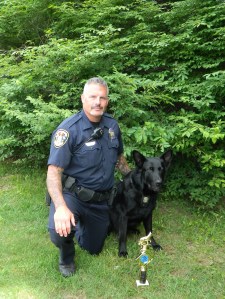 Despite an injury that threatened to keep them from competing, the K-9 team of officer Steve Vesco and his partner Iko of the Windsor, Connecticut Police Department, once again brought home a United States Police Canine Association trophy. The team finished fourth overall in criminal apprehension in the 2013 Region 4 contest. Vesco and Iko were the only team representing Connecticut in the trials which also celebrated the 50th anniversary of the establishment of the Boston Police Department’s K-9 unit.

“I was ecstatic. I almost dropped out. But I got him through the competition,” Vesco said during an interview June 6 at the Public Safety Complex in Windsor, CT.

Iko sustained an injury to a nerve in a rear leg during training which effected his gait. With the 5-year-old German Shepard having been checked by a veterinarian, Vesco decided to proceed – but with care.

“I pulled him out of a couple events,” Vesco noted.

The weather compounded the challenge faced by the pair. Aware that Iko’s solid black coat intensified the impact of the powerful sun and temperatures in the high ninety degrees, Vesco made sure to keep the canine hydrated and in the shade as much as possible.

“Out in the field he wasn’t fully focused. At times we just concentrated on breathing,” said Vesco.

The USPCA trials were held in Dorchester, Massachusetts on May 31, June 1 and 2. According to Vesco, it was the first time the competition took place there and it coincided with the 50th anniversary of the establishment of the Boston Police Department’s K-9 unit.

Asked if the recent Boston Marathon bombing was discussed at the trials, Vesco said the topic came up but the focus was on the competition at-hand.

Thirty-seven police K-9 teams competed from throughout the Northeast including Maine, New Hampshire, MA, New York and CT. The competition included a series of events in the following categories: agility, obedience, suspect search, evidence recovery and criminal apprehension. The latter is also known as bite work and occurs under two conditions, with and without gunfire.

“For evidence recovery, he had to locate a shotgun shell and screwdriver within a 40′ X 40′ square. He did both within 37 seconds,” Vesco noted.

“It’s certification through competition,” he explained.

“Competing at the highest level, it keeps you on top of your game, ” added Vesco.

Vesco was also joined at the event by his wife, and daughter who still enjoys bringing his trophies into school for Show & Tell.

Referring to this latest trophy, Vesco said with a smile, “Oh yes, she said to me, ‘Daddy, that’s going in my room’.”

That will be a temporary location. Eventually the 2013 trophy will take its place on the mantle of the Vesco home alongside many others marking Vesco’s long and ongoing history of achievements in police K-9 competitions. 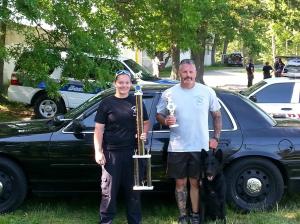 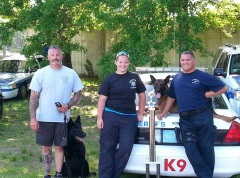