A model of the CT Trees of Honor Memorial on display at Bradley International Airport.

A Connecticut Trees of Honor Memorial model is being shown at Bradley International Airport in Windsor Locks through at least to the end of September.

“This was an absolute no-brainer. It is our honor to have it here in the airport. We’re very touched by it and hope it will have some impact as the visual reaches people,” said Stacey Doan, who handles marketing for Bradley International Airport (BIA). 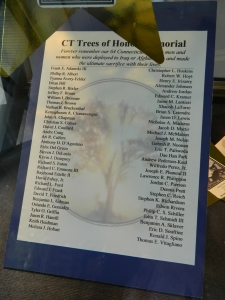 Visitors to terminal A have the opportunity to see two display cases housing a small scale model of the living memorial grove of trees for which construction is slated to begin in September of this year, at Veterans’ Memorial Park on Newfield Court in Middletown, to honor the state’s military men and women who gave their lives in service to the nation in the wars in Iraq and Afghanistan. The display also has hanging stars with photos of each of the state’s 64 fallen heroes and gear belonging to the fallen soldiers – including a dress uniform worn by SGT Steven DeLuzio at his brother’s wedding.

Diane DeLuzio, whose son was killed in Afghanistan, stands by his dress uniform which is part of the memorial display.

Diane DeLuzio of Glastonbury, a member of the Connecticut Trees of Honor Memorial Inc. Committee, whose son Steven served in Iraq and was killed on August 22, 2010 while serving in Afghanistan, gave permission for some of his gear and his dress uniform to be part of the display. Becoming choked up as she talked about him during an interview on April 4, she said her other son is also in the service and both wore their dress uniforms to his 2008 wedding.

“Already as we were setting this up people were stopping and looking, they seemed to be very moved by it,” said Nancy Rousselle of Windsor, who along with Sue Martucci of Bloomfield and Ann Walsh of Windsor spearheaded the project.

Phase I of the memorial, planting of the trees, is scheduled to begin this autumn. Pillars with personalized memorial plaques will be erected next to each tree.

“We’re hoping some of the nurseries in the state will come forward and donate trees,” noted Rousselle.

If not, thanks to an anonymous donation the committee has money to get the memorial underway. A non-profit organization, the goal of the committee she said is to not take state or federal money for the memorial. Rather to have it realized totally through fundraising, volunteer efforts, private donations and sponsors. As such, the committee is currently in search of a corporate sponsor.

The living memorial, a symbol of gratitude to those who made the ultimate sacrifice, became a dream for Martucci after her daughter, an Army major, returned home safely from duty. Plans for the memorial took off following a conversation around a table one day among Martucci, Walsh and Rousselle.

“I joined the Blue Star Mothers and we began attending services for Gold Star families. It was very emotional and I wanted to do something for them,” recalled Martucci.

Martucci was inspired to suggest the Connecticut Trees of Honor Memorial, after learning about a similar tribute of planted trees at Fort Stewart in Georgia, and, by the collaborative efforts on the Wall of Honor at the state capitol by Lt. Governor Nancy Wyman and well-known broadcast personality Brad Davis, who served in the U.S. Marines. Throughout the development process Martucci said members of Vietnam Veterans’ organizations have been very helpful.

The intent is for Connecticut Trees of Honor Memorial to be a serene, reflective area. It will also feature walkways, flowing bodies of water, flower gardens, benches, flagpoles, statues and lighting. As part of Phase II, the committee plans to erect monuments at the ceremonial area and landscape the entryway.

It was through her work at an East Granby elementary school that Martucci learned from the art teacher about the artisan showcases available for use at BIA. It took the committee months to prepare the display, in part because they had to contact the families of each of the 64 troops and request a photo and permission to use the photo. Most literature about the event still says 63 fallen, but sadly since it was printed Connecticut had another casualty, CPT Andrew Pedersen-Keal of Canton and Madsion killed on March 11, 2013. There is space for more than the 64 trees to be planted at the four acre memorial site in Middletown but committee members said their hope is that will not be necessary, that no other Connecticut soldiers will be killed.

Anyone interested in helping with the statewide memorial can do so in a number of ways: state nurseries, wholesalers and retailers are invited to donate trees; garden clubs and civic clubs are invited to submit plans for flower or shrubbery gardens to be maintained by that club; the Buy-A-Brick Program whereby a personalized, engraved 4 x8 brick will become part of the permanent memorial(online orders can be submitted to http://www.bricksrus.com/order/trees); the Buy-A-Challenge-Coin program; becoming a volunteer, or through monetary donations.

Go to: http://www.CTTREESOFHONOR.COM for more information.