A New York style deli may seem to be an unlikely choice for dining out on St. Patrick’s Day but not when it comes to Rein’s Deli in Vernon, Connecticut. Each March 17th and for a few days before the ever popular Rein’s takes to heart the saying that everyone is a little bit Irish this time of year and transforms itself into “Ryan’s Deli” complete with green decorations, some green shirted waistaff and most importantly – a sizable corned beef and cabbage dinner. 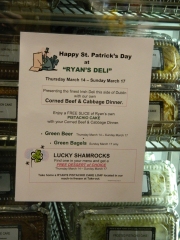 For those in search of a traditional St. Patrick’s Day corned beef & cabbage meal, a showcase in the front of the restaurant displayed all the fixings – a teaser for the taste buds while waiting in line, which though long moved quickly. Rein’s offers breakfast all day and green bagels were also being served in honor of the holiday. Or one could wet his/her whistle with green beer or an Irish Coffee from the bar.

In addition the full regular menu was available including a variety of salads, soups, entrees, sandwiches, burgers and a number of gluten free choices. A full line of desserts was available too. Among them, topping off the corned beef & cabbage meal – a piece of pistachio cake. And, if one slice was not enough, pistachio cakes, as well as an array of other items, could be found in the take out freezer to bring home.