Perfection. That sums up the weather that accompanied the 76th Thanksgiving Day Road Race in Manchester, Connecticut. Sunny skies and temperatures in the high 40 to low 50 degrees were an ideal compliment to what is considered the state’s biggest sporting event. In addition to the 15,000 runners and walkers, including elite competitors, the race drew an estimated 30,000 spectators.

One die hard tradition at the Manchester Road Race is its exact 10:00 a.m. start time. In a television interview with FOX CT which broadcast the race live, the race director explained the importance of  the exact start is tied to keeping the event within a dependable time frame so that participants can enjoy their personal traditions – such as making it home for Thanksgiving Day dinner. New this year was the addition of a cannon blast which followed the official start. 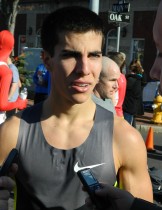 Steeped in traditions, the race has been described as an interesting mix of a small town atmosphere concurrent with a big time competition. And, this event has become about more than just what takes place on the near five mile course. It is also about what goes on around it.

For Bill Doll, it’s a B.Y.O.L. day – bring your own ladder. The Manchester resident and amateur photographer brings a ladder, places it on the race route and perches himself atop to snap pictures.

He is just one of innumerable racers and race-goers with annual race day rituals. For others who gather at the same location each year, it’s a yearly reunion. Some folks met at a friend’s house within the course route. A handful of spectators got a bird’s eye view from the roof of a downtown building. Meanwhile, some people situated themselves by the bands that were positioned along the route – this year there were fifteen bands. Still others made it a family affair – dressing alike and running the race together. Many spectators tailgated and wore colorful costumes as did some of the racers, a number of whom brought their own  individual cheering sections. Among the costumes that could seen were Sponge Bob, a Christmas Tree and a super long grinder sandwich. 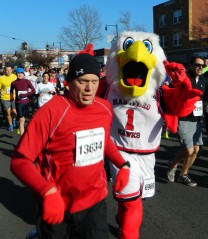 Outside the Army Navy Club.

“This isn’t a road race anymore, it’s a costume party,” said one spectator.

Oh yes, who could forget another time honored Manchester Thanksgiving

Each year the Army Navy Club graciously opens its doors to the runners, many of  whom stretch out inside as they prepare to take their spots in a massive race line-up. It was said to have taken close to thirteen minutes for all the participants to make it across the start line in front of St. James Church on Main Street.

First time participant Aaron Braun of Flagstaff, Arizona won tying the record with a time of 21 minutes, 19.37 seconds. A crowd favorite, Olympian Donn Cabral of Glastonbury, Conn. came in third with a time of 21:33. The first woman across the finish line, Delililah DiCrescenzo of New York City clocked in at 24:34.

Members of Tolland High School Class of 2010 had some fun, dressing up in costumes.

However, long after the world class runners finished – the race continued.

Up on the roof.

“Main Street is still filled with runners, from side to side, as far the eye can see,” the race commentator said as 11:00 a.m.approached, noting that at that point the last runner was at approximately the one mile mark.

A sea of seemingly endless runners went on and on…. Once back on Main Street they crossed under the huge American flag that had been raised by the Manchester Fire Department and headed for the finish line  – and rows of bottled water.

Organizers had worried they could not top the fabulousness of the 75th anniversary race last year. Their worries were for naught. The 76th Manchester Road Race went off with its usual energy, competitiveness and wholesome fun – carrying on one of New England’s most enjoyable traditions!