Dedication of the new veterans monument May 27, 2012 in Enfield, CT

“All gave some, some gave all,” the speaker’s voice cracked as he spoke those emotion-filled words Sunday May 27, when Enfield Connecticut held its 2012 Memorial Day Parade and dedicated a new veterans monument on the town green.

Another speaker, Veterans Council Chairman Ted Pladmonton told the crowd that Enfield is known for its patriotism. While some towns no longer hold Memorial Day Parades, Enfield has for the past 50 years, he noted. “And we will continue to as long as I’m alive,” he promised. 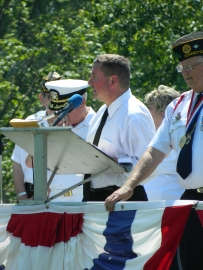 During the Memorial Day ceremony, State Senator John Kissel (R-Enfield) said his hope is that the United States will someday soon again be at peace.

State Senator John Kissel (R-Enfield) recalled his youth, noting that before he was graduated from high school the war in Viet Nam ended. In addition to showing gratitude to those who have served the nation, Kissel asked that everyone join him in his hope that someday soon the United States will once again “be at peace.”

The ceremony featured the unveiling and dedication of a new veterans monument meant to recognize all branches of the service and all veterans who gave their lives for their country. Located near the World War II Honor Roll Memorial, the new multi-section monument is stunning black,  with a mirror effect. On one side, each branch is listed while on the other side are their mottos.

“If you stand in the middle you can see your reflection in each section and sound echoes back, that is intentional,” explained one woman.

Marching bands from Enfield High School and Enrico Fermi High School capped the ceremony with a rendition of the “Star Spangled-Banner.” It may be one of the last Memorial Day Parades for Enrico Fermi students because Enfield plans to combine its two high schools.

Prior to the speeches the hour long parade began at 1:00 p.m. at the

A little girl steps out and offers flowers to a marching soldier.