A little after 11:00 a.m. this morning Robert and Stephen McKay pitched the first tent on the town green in Windsor, Connecticut in preparation for the 2012 Shad Derby Day Parade & Festival on the Green scheduled for Saturday, May 19. The father and son, both Masons, were putting up the tent that will house CHIPS, a child safety identification program sponsored by Masonic Lodge #70. On the southern end of the green, orange fencing had been erected and picnic tables set up inside what will be the Beer Garden.

The Beer Garden is ready for tomorrow’s festival goers.

By the same time tomorrow, expect one end of the green to the other to be filled with tents, an abundance of activities, music, games, vendors offering a variety of food and beverages, as well as, crafts and much, much, more as Windsor puts on its annual signature event to celebrate the return of the

shad that migrate north,swimming up the Connecticut River each year to spawn. 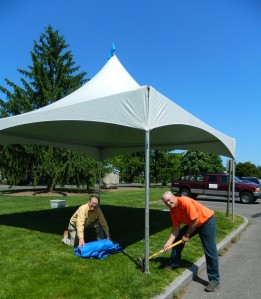 Father and son, Robert and Stephen McKay pitched the first tent in preparation for Saturday’s Shad Derby Day Parade & Festival on the Green.

“The Shad Always Return” is the motto of the event that has been going on since 1954. The Shad Derby Day Parade is scheduled to kick- off at Windsor High School at 12:30 and make its way to the town center by 1:00 p.m. There it will pass the reviewing stand. Among those to look for in the parade are the Governor’s Horse Guard, the Windsor Fife & Drum Corps, 2012 inductees in the WHS Sports Hall of Fame, the Mystic Highland Pipe Band, the Manchester Regional Police & Fire Pipe Band, the Warehouse Point Ancient Fife & Drum Corps, a number of Sphinx Shriner’s units such as the Funsters, the WHS Marching Band and the Queen’s Float carrying the recently crowned 2012 Shad Derby Queen and her court.

Organized by the Windsor Jaycees and held the third Saturday in May, Shad Derby Day is one of those wonderful hometown events – a bit of Americana.

Mayor Donald Trinks, a former Windsor Jaycee who was active in the Shad Derby for many years, noted how pleased he is that the group is carrying on the tradition. “I’m so proud of them. The group has grown, and, the excitement level,” he said earlier today.

The festival on the green runs from 10:00 a.m. to 4:00 p.m., admission is free . A sunny, warm day is forecast – perfect for getting out and enjoying the festivities in Connecticut’s oldest town!