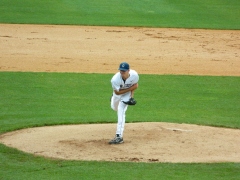 Senior David Fisher was on the mound first for UConn in a May 5 doubleheader at Dodd Stadium .

As beautiful as the Storrs campus is, it is a nice change for fans when the University of Connecticut Baseball Team plays an occassional  home game at Dodd Stadium in Norwich, Connecticut as it did this past Saturday. In a doubleheader with the Cincinnati Bearcats, the Connecticut Huskies came up with a 4-3 win in the afternoon opener but fell 1-0 in the second game. In game one, junior LJ Mazzilli had the winning hit enabling two runners to score late in the match-up.

The Huskies were the 2011 Big East regular season champions. 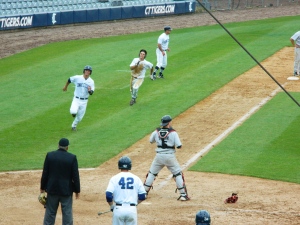 The winning runs in game one.