The Boston Red Sox will commemorate the 100th anniversary of the opening of historic Fenway Park today during a pre-game ceremony. The ceremony will take place just before the Sox continue one of the greatest of all sport’s rivalries, in a game with the New York Yankees, the same team the Sox beat 7-6 in eleven innings on April 20, 1912 – then called The New York Highlanders, according to redsox.com. Both teams are scheduled to wear their throwback uniforms. Expect the first pitch to be thrown this afternoon at 3:15 p.m.

My sister Candy seated beside the Green Monster at Fenway Park.

Yesterday a free open house was held at Fenway attracting 52,000 visitors, redsox.com reports. Wally the Green Monster roamed about and past and present players were on-hand to sign autographs. Though not today, walking tours of Fenway are generally available daily – $16 for adults, $14 for seniors and $12 for the military, students and children. 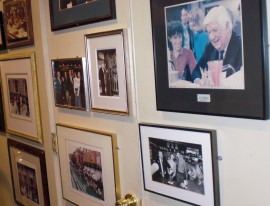 On display at Cheers in Faneuil Hall marketplace.

Visit the official Sox Website  to view other photos and interesting trivia about the team and America’s most famous ballpark. For example, it was Nathan Cobb, a writer for the Boston Globe who coined the term ‘Red Sox Nation’ in 1986.

It is “the intimacy” of Fenway Park that is said to set it apart, an open ballpark located in the heart of downtown Boston. The fictional Sam Mallone, played by Ted Danson on the popular 1980’s televsion show “Cheers” gained famed here as “Mayday Mallone ,” a relief pitcher for the Sox.

From May 7th to May 20th, fans of Red Sox Nation can vote on-line for the greatest ever Red Sox team by visiting redsox.com. A Tenth Man vote will begin May 22.