A benefit for the troops at Dom’s Broad Street Eatery in Windsor, Connecticut was a perfect fit for the launch of a “Pay It Forward” project put together by a Windsor soldier and local police detective.

Every third Friday of the month Dom’s Eatery hosts a benefit for SEND HOMETOWN WINDSOR TO THE TROOPS from 5 p.m. to 8 p.m. A steady stream of patrons arrived January 20 to enjoy supper and and support SEND, a WIN-TV project coordinated by Ann Walsh. Through SEND, care boxes have been mailed to troops in Iraq and Afghanistan over the past six years. For restaurant owner Jason DiBella the monthly benefits are an opportunity to support American troops and show appreciation to the community for its outpouring of love and assistance when his father Dom DiBella was battling cancer.

“It’s a community tradition. They came out to support my dad,” Jason DiBella said.

This past Friday also featured a kick-off for a collaborative effort by Detective Russ Wininger of the Windsor Police Department in response to a “Pay It Forward” initiative from Windsor soldier Dan Nolan, who is deployed in Afghanistan. A member of the Connecticut Army National Guard, Nolan leads the 246th Firefighter Detachment and previously served in Iraq. 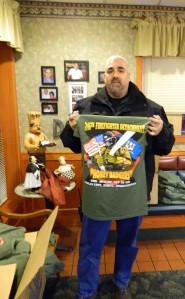 “Dan and I have been friends for 20 years,” noted Wininger.

According to Wininger, the “Pay It Forward” initiative was launched by Nolan, a longtime Hartford firefighter in memory of his friend and fellow Hartford firefighter Matt Dirrane. In December 2010, Dirrane died as the result of a motor vehicle accident while he was on vacation in Costa Rica. In honor of the compassionate way Dirrane lived his life, Nolan asked that “Pay It Forward” deeds of kindness be done  in November and December of 2011 and recorded on a memorial Facebook page.

Popularized by a movie of the same name released in 2000, the “Pay It Forward” concept encourages people to make the world a better place with random acts of kindness.

Wininger responded to Nolan’s appeal with an idea to have t-shirts made up for his detachment.

So Wininger set out to make that happen. When Nolan learned of the project he decided to ask his army superiors if the rendering from the “Pay It Forward” project could become the official t-shirt of his detachment, recalled Wininger. With a few items added in the design, approval came.

“It was quite a feeling receiving word of the approval from Afghanistan,” he said.

The t-shirts were ready “hot off the presses” on January 18, ideal timing for Walsh to have them available at Dom’s SEND benefit. Army fatigue green, the shirts show the detachment number on the front. The back reads “Honey Badgers” with a firefighter depiction, American flag, Connecticut state flag and a shamrock with Dirrane’s initials inside. They are available to the public for a $20 donation to cover the cost of production, any amount beyond that will go to SEND. Contact Walsh at: 860-806-2662.

As for the benefit itself, some of those in attendance such as state Rep. Peggy Sayers (D-Windsor Locks) and her husband Patrick make a point to turn out as often as possible, they said.

“Ann does so much for the troops, so much for Windsor. We wanted to be here,” said Sayers.

Walsh’s Breakfast Club attends every fundraiser at Dom’s -Walsh, Fran and Marian Murphy, Mary Jane Shay, Peggy Eberle, Joyce Phillips, Margaret Putnam, Gay Healy, and Corky & Chuck Ericson.  A photo of the group is even on the wall near the regular spot where they sit at a long table in the back of the restaurant.

Support for SEND is personal to David and Mary Lou Peters whose son Zachary is serving his second tour of duty in Afghanistan and has served in Iraq. They were joined by friends Fred and Jane Girmshaw.

Paul and Tammy Girard brought their children Mitchell and Alyssa described by Walsh as “faithful packers” for the SEND boxes.Tammy Girard said her son’s and daughter’s involvement with SEND has taught them a true understanding of the sacrifices being made by the troops.

“Alyssa remembers their names, and, named her new dollhouse character after one of the soldiers,” said Tammy Girard.

Former Windsor Republican Town Committee Chairman David Raney and his wife Loretta said they believe it is important to continue showing support for the troops. With them was Windsor Town Council member Lisa Marie Boccia. For a number of years, she and her husband Phil Lucas have bought the items to fill boxes for their ‘adopted’ Windsor soldiers from SEND. Their most recent adopted soldier just returned home but they plan to continue with another adoptee.

“I’m so happy when they come home…. you become emotionally attached,” said Boccia.

As folks exited many did so with the 246th’s “Pay It Forward” shirt in hand, which gratified Walsh who by the end of the evening was wearing one herself! 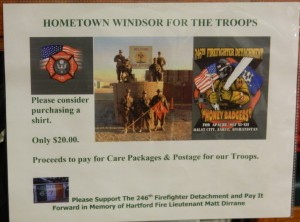 Shirts are available for a $20 donation