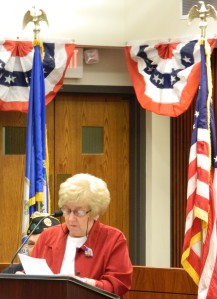 For nearly six years Ann Walsh’s  irrepressible determination and big heart have been the  driving  force behind Send Hometown Windsor To The Troops, a community service project of WIN-TV.  Thanks to her ongoing efforts Windsor’s sons  and daughters serving in the military in Iraq and  Afghanistan receive care packages on a regular basis, boxes filled with basic necessities,  homemade  cookies, homemade breads, other goodies and cards and letters to remind them they are thought about  and  appreciated. This year Walsh was honored by Windsor’s veterans – chosen as the first person who is not a veteran, to give the keynote speech for the Veterans Day Ceremony held 11/11/11 at town hall.

She spoke of the strong sense of patriotism instilled in her by her mother Mary Margaret McGrail,  who was born on Armistice Day November 11, 1918 and passed away three years ago.

Walsh then focused on the men and women who have served and those still serving so far from  home in harm’s way. LT. Mike Antoine wrote her in 2007, “If you ever come across any UConn  Husky stuff I would  wear it proudly. I am a Husky grad from 1985. ..Please do not feel obligated but if someone ever donated t-shirts or hats I would wear it proudly.”

“Well, you bet he got UConn stuff,” said Walsh.

Another 2007 note came from ATCS (AW) Daniel K. McCloud who happened upon a SEND care box. At the time he was aboard the USS Enterprise which was involved in Operation Iraqi Freedom and Enduring Freedom in Afghanistan. Walsh choked up as she read his words,”Being away from home and missing my family during the holidays has been made just a little easier knowing that people back home are thinking about us out here.”

“And Danny Nolan. Just three years ago Danny stood here giving the speech,” said Walsh, referring to Staff Sgt. Dan Nolan who served in Iraq and was deployed in September 2011 for Afghanistan. Walsh recited a poem by an unknown author Nolan posted on Facebook for this Veterans Day. It reads, “What is a veteran? A veteran – whether active duty, discharged, retired or reserve is someone who at one point in his/her life wrote a blank check made payable to the United States of America for an amount up to and including his/her life. That is an honor……”

Among those in the audience was Nolan’s family -his brother John, a U.S. Air Force veteran and John’s wife Sue, as well as, three of Nolan’s sisters, Noreen, Claire and Maggie.

In thanking the many people who have participated in SEND, Walsh appealed for continued support of the project. Even just a few minutes to write a message can make all the difference to troops who often post messages from back home on their lockers, she said.

“We all have ten minutes a month (to write). That is my important message to you and I hope you spread it,” said Walsh. 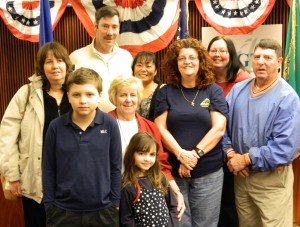