Windsor, Connecticut provided a compelling tenth anniversary commemoration, recreating its award-winning tribute to the victims of 9/11, “Walk of Light.” Drawing viewers from near and far, and replicated elsewhere, for the third time since the September 11, 2001 terrorist attacks against the United States, nearly 3,000 luminaries inscribed with the victim’s names, decorated and personalized by local students and civic groups lined Windsor’s historic town green.

In resounding voice Rev. Robert L. Littlejohn, Jr., pastor from the Pilgrim Way Baptist Church, shared moving words with the crowd gathered on the green, “America the beautiful …. We ARE a great nation……in spite of our pain and loss we must NEVER quit …. we must NEVER give in… march on…..”

Mayor Donald Trinks told the group, “ I couldn’t be more proud of my hometown than I am tonight.”

“I was determined to make an observance that allows people to reflect in their own way. People can come and just sit for a couple hours on the green or stroll the walk with family, friends or alone. We just want people to know – we are here,” Enita Jubrey, assistant to the town manager and tribute organizer, said prior to the event.

Jubrey not only coordinated the tributes, held in 2002, 2006 and 2011, but for the first anniversary she proposed the original which won a 2002 Savvy award. More than 5,000 visitors turned out, a figure surpassed for the fifth and tenth anniversaries.

Town staff and community volunteers created and executed the three commemorations with a goal to honor each life lost in the attacks in a “simple yet poignant” way. Over the past several months, social studies students from

Sage Park Middle School and Windsor High School researched the personal histories of the victims online and decorated 1,900 of the bags. Other Windsor students from Madina Academy-a Muslim school, St.Gabriel’s School and Trinity Christian School, as well as, inmates at the York Correctional Institution decorated the remaining bags.

On the steps of Windsor Town Hall

WHS sophomore Mallori Thompson, who helped decorate the luminaries, was six years old and in elementary school at the time of the attacks. She recalled that although the youngsters were not given details about what was happening her teachers seemed nervous.

“I remember we didn’t have recess,” she said.

On Sunday, 9/11/2011, staff and volunteers spent the day filling the luminary bags with sand. Indicative of the continued significance of town greens in the historical tapestry of New England, the luminaries were placed on the sidewalks along the full length of Windsor Town Green, approximately two football fields long or four times the size of Madison Square Garden. At 6:30 p.m. volunteers began snapping and inserting red, white and blue glow sticks into the bags which glowed brightly into the night.

In front of town hall, which is located on the green and was illuminated and draped in American flags, a brief ceremony took place at 7:00 p.m. –  including speakers, an a cappella rendition of the Star Spangled Banner by the band Tirebiter, a traditional bell-tolling from the Windsor Volunteer Fire Department and “Amazing Grace” performed by bagpiper Richard Shea.

Resident Maureen Donegan, whose brother William Hill Kelly, Jr. was killed in the attack on the World Trade Center in New York, attended the tribute with her husband and their two daughters. 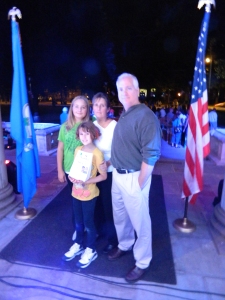 “I truly feel privileged to live in Windsor, a community that cares so much about how it honors those who were lost on September 11th,” she had said earlier. She also praised a 9/11 Memorial sculpture that stands in the WHS courtyard, created through the combined efforts of special education students, a local sculptor and an art student.

Among others in town directly impacted by the attacks, which happened at the WTC, the Pentagon and on United Airlines Flight 93 that crashed into a field in Pennsylvania, is Duane Orloske. He lost his wife Margaret , mother of their then 19-year-old son, in the attacks on the twin towers.

“We were high school sweethearts at Trumbull High,” he recalled.

That fateful morning began like any with the couple sharing coffee and breakfast around 4:30 a.m. before each headed off to their respective jobs, hers being in New York City. Stymied by red tape thus far, Orloske said, he is still searching for information about a missed call that came into his cell phone on 9/11/2001. “I would like to know what time that call came in,” he said.

Recently remarried, Orloske remains an active member of  “the Voiices of September 11th.” By wearing a turquoise
colored remembrance bracelet, he keeps Margaret close in spirit.

John Carmon and Dan Nolan come from Windsor families with a tradition of public service. Nonetheless, neither could have imagined they would find themselves at the crossroads of American history, in the aftermath of the worse terrorist attacks on U.S. soil. Called upon to serve, both responded.

Director of the National Funeral Directors Association at the time, Carmon coordinated 120 volunteer funeral directors from across the country that came to assist in NY. And, he did public service announcements telling how victim’s bodies were being identified and where they were being taken.

“They needed people with knowledge, accustomed to dealing with those in grief,” said Carmon.

A vivid memory for Carmon is of people dubbed “the cheerleaders” who lined the routes into ground zero shouting words of encouragement and ‘thank you’ to those who came to aid the city. Said Carmon,“It is as if they were gifts from God.”

As deputy chief of the Hartford Fire Department, Nolan led a contingent to help at ground zero.

“I wanted to go. Being a firefighter, to want to help is a natural instinct,” Nolan said.

He too experienced the “cheerleaders’ ” shouts of gratitude during the hour-long walk to ground zero from the piers. Once there, he recounted, it was like nothing he had ever before seen.

“You think you’ve seen it all but this opened up a whole new world of what tragedy could be,” added Nolan.

Subsequently, Nolan made at least ten return trips to NYC, some to attend funerals of his fallen brethren. Often he was accompanied by fellow Hartford firefighter and his best friend Matt Dirrane, who died in December 2010, after an accident while he was on vacation in Costa Rica.

A staff sergeant in the Connecticut Army National Guard, Nolan served in the ensuing war in Iraq and deployed this September 9th for duty in Afghanistan as leader of a firefighter unit, the 246th Engineer Detachment.

Inspired to design the “Walk of Light” by a fundraiser she saw while visiting her parents in Wisconsin, Jubrey said she has
tried to elevate each tribute with improved cross-referencing to make it easier to find particular luminaries. And, based on updated information there is a slight variation in the number of luminaries since the first tribute.

What has remained constant is Jubrey’s hope that for those who come to view it, the “Walk of Light” conveys that every luminary is about a life that mattered.

“Maybe we didn’t know that person, but someone did,” said Jubrey.

About the writer:A freelance journalist and University of Connecticut graduate, my work has been recognized with five, Society of Professional Journalists, Connecticut Chapter awards for excellence in journalism. In addition to Connecticut publications, I have written for The New York Times and The Boston Globe.