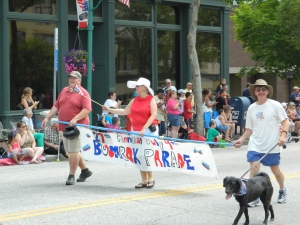 The 27th annual Boom Box Parade drew thousands of participants and spectators to Willimantic, Connecticut today to celebrate the Fourth of July. The unique parade began in 1986 after no marching bands could be found to take part in the town’s Memorial Day Parade. Thanks to Yankee ingenuity and WILI – the local radio station – a few weeks later the idea for a boom box parade came to life. It quickly became enormously popular and has captured attention well beyond the borders of this small community nestled in the eastern corner of the Nutmeg State. 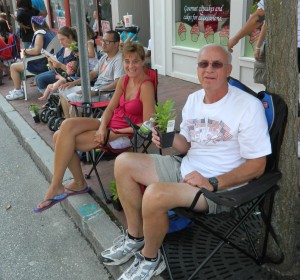 Henri Gamache of Willimantic, holds a complimentary plant distributed by a local nursery that participated in the parade. 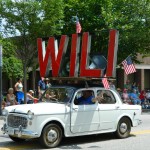 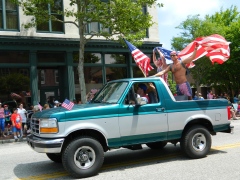 Anyone can march in the parade down the Main Street. Participants are asked to wear red, white and 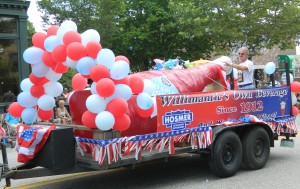 For the parade, WILI plays mostly patriotic tunes  but today’s mix also included the University of Connecticut fight song. Folks who lined the parade route to watch also brought radios tuned to the local station. A number of politicians turned out to march. 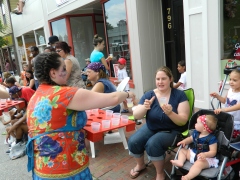 Mike Nelson, a studio manager for Channel 14 Charter Communications, gets a worm’s eye view of the Boom Box Parade.

Mounatin Dairy has been delivering milk for decades.

What began as an overcast day, gave way to sunshine just before the one hour and ten minute parade got underway at 11:00 a.m. Spirits were high and smiles plentiful!