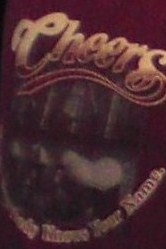 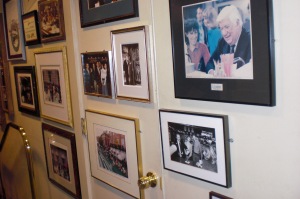 Most people know about the Cheers bar, formerly the Bull & Finch on Beacon Street in Boston, Massachusetts made famous by the television show “Cheers.” Less known may be that a Cheers replica bar is located at Faneuil Hall Marketplace. Dating back to 1826 when it sold meat, poultry, eggs and butter the marketplace was renovated in 1976. In the heart of the city, it still thrives today but now sells tourist type wares. Cheers at Faneuil Hall is a recreation of the set viewers saw week in and week out on the popular 1980s comedy series starring Ted Danson as Sam Malone and Shelly Long as Diane Chambers.

Wall memorabilia includes photos of the cast, as well as. some of the famous visitors to the bar. The Faneuil Hall location is well – cheerful- with plenty of light streaming into the upstairs cafe through the solarium effect full length windows engulfing the restaurant which looks onto a brown brick walkway. There is also an outdoor patio and a downstairs bar.

Greeting visitors is an Indian statue resembling one that welcomed the ole “Cheers” gang  (sporting a Boston Red Sox cap in the accompanying photo as a tip of the hat from our group to “Cheers” pitching closer Mayday Malone. )

The Cheers menu is typical Americana pub fare – soups, salads, burgers, sandwiches and New England seafood. What makes them stand-out, however, is that many are named after the beloved cast such as the Giant Norm Burger, appetizers dubbed Sam’s Starters, Woody’s Garden Greens and Ma Clavin’s Boston Clam Chowda. Of course, there is beer and an interesting cocktail menu with drinks  like the “Boston Tea Party.” Nearby is a Cheers gift shop that honors Cheers bucks available on their website.

The best part of stopping into Cheers may just be, being able to say you were there – where? Oh yes, that place where “everybody knows your name.”