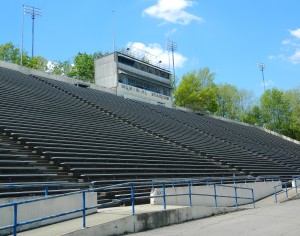 UConn’s Memorial Stadium in Storrs, CT 5/13/2012 – slated to be dismantled starting this week.

“There are places I remember all my life -Though some have changed- Some forever, not for better- Some have gone and some remain…” Beatles lyrics.

This week dismantling begins of Memorial Stadium in Storrs, Connecticut, home to University of Connecticut football from 1953-2002. Though replaced by Rentschler Field in 2003 ( a 40,000 seat stadium located in East Hartford) Memorial Stadium has remained standing – until now.

In the great scheme of things it is not a tragic loss, yet for me it is an ending that evokes a bit of melancholy as I recall my days as a UConn coed, walking up Fairfield Avenue on a crisp, cool autumn Saturday afternoon headed for a game at Memorial Stadium, the UConn Marching Band running onto the field there, the roar of the crowd after a UConn touchdown – but most of all, old friends. 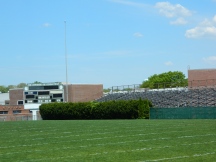 The old scoreboard,next to the visitor’s side bleachers, at soon to be dismantled Memorial Stadium.

Yesterday I drove out to the Storrs campus to take a last look at the stadium. Now in disrepair, it was once a vibrant facility. “The Hill” just outside the southern gate was a popular viewing spot but hardcore fans stood and watched near the end zone closest to the Field House. More intimate than its bigger replacement, the stands at the 16,200 seat Memorial Stadium offered a bird’s eye view of the action on and off the field – as folks strolled up and down the cement concourse below, where the cheerleaders did their thing. On each end of the stadium there where refreshment stands that are already gone.

A particularly strong memory for me is attending a game, by then an alum, not long after the September 11, 2001 terrorist attacks against the United States. Among the crowd I felt a powerful sense of unity and determination as everyone stood, and together solemnly sang our national anthem – “The Star-Spangled Banner.”

Of course, many happy, carefree moments also came to mind.

The process of dismantling Memorial Stadium is expected to continue through June. A new, multi-million dollar basketball practice facility will be built on the site.